We arrived safely in Delhi Saturday afternoon.  We must have had good tail winds as the flight from Chicago was “only” 13.5 hours.  A big answer to prayer is that our luggage made it too.  Seen here is Shane’s view of the Himalayas as we passed over. 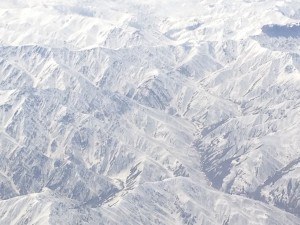 The Delhi/New Dehli metropolitan area has a population of 17 to 18 million.  To put that in perspective, that’s nearly three times the population of the State of Indiana in an area smaller than Marion and Hendricks Counties combined.

Last summer during their visit to Connection Pointe, ministry leaders Victor John, Prakash James and Usha Das described to us their Community Learning Center concept.  Today, and the rest of this week, we get to see CLCs in action.  In short, CLCs minister to a variety of human needs in a community, thus opening the door to the gospel.  This approach has been generally well accepted by community and government leaders in a nation where Christianity is a minority religion.