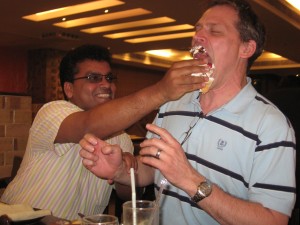 The train ride was an inspirational trip.  On one part it shows us how most Indians travel from city to city.  On the other end I had the opportunity to see how an Indian man protects his family.  Throughout the night a man continued to pull our curtain back and check on his family.  He would walk into our area and look around.  At one point he stood there silently for over 15 minutes.  Since I was unable to sleep, I watched a movie and read until early.
Eventually I fell asleep for two hours.  I awoke at 4:30 am to use the restroom. ( that is a whole other story, think a hole in the floor on a moving train). When I returned Matthew was waking and preparing for a journey to the restroom as well.  When he returned we had one of the best conversations on the trip.  He and his wife plan to move to Texas later this year and he had many questions about our culture, including the whole concept of dating.  Arranged marriages are common in India and we had talked earlier to an Indian couple who now live in America.  They were an arranged marriage and met only one month prior to being married.
Matthew did not have an arranged marriage, but did say his was arranged by God.  Our conversation was one of the deepest conversations I have had with a man. Through this I could tell he and I would be friends through eternity.  Their whole ministry is based on relationship building and I understand this so well.
We arrived in New Delhi at 6:00 am and our day was just starting.  The plan was to drop us at the hotel and give us rest until 4:00 pm as we had been moving along pretty hard all week.  It was amazing to see how everyone on our team did not want that much rest and we negotiated for them to pick us up at 1:00 pm instead.  This allowed them all a bit of family times they live in the area.
Once they picked us up we headed for a quick shopping trip on our way to a meeting with CLC leaders.  Many of us bought a few items for people back home and I bought a pair of sandals similar to the ones Prakash and Matthew wore.  ( I had been admiring them). After this we headed to our meeting.
The meeting was different from the others we attended so far.  My struggle with being sat in front of everyone was resolved here in Delhi.  Their structure was different as we started with worship music, then moved to testimonies.  Their stories are so captivating and come with such conviction.  These leaders are taking risks and sharing the Gospel while we are afraid to proclaim our faith in much safer confines at home.  They are the front lines while we merely attempt to dress their wounds.
They also asked us to share in the midst of their testimonies.  It was a true blend of East meets West.  The Holy Spirit was clearly in the room and shined brightly during our second round of worship music.  It was an awe inspiring time with fellow believers halfway across the globe.  Language barriers were no issue as we served the same Master.
After the meeting it was time for a special dinner.  We went to Barbecue Nation which is a favorite place of Prakash.  This was unlike any other meal we had and really gave us time to sit and enjoy.  Toward the end Prakash arranged for a birthday cake for me.  He knew my birthday was at the end of March, but wanted to celebrate now and have a little fun with it.
The restaurant makes Abigail production for birthdays and the staff of roughly twenty all surround you singing while a song plays on the speakers.  He told me I had to dance so I obliged by standing on my chair and shaking my tail in his face.  Everyone laughed and Prakash’s face turned red despite his dark skin. After he took the opportunity to perform an Indian tradition and fed me a bite of cake.  Correction to that last statement, he shoved it in my mouth, nose and face.  I was a true scene and the entire restaurant applauded.
I tell this story to reflect on the fact we barely knew each other five days prior and now we were able to break down barriers and poke fun at each other.  This again reflects on their whole strategy to build relationships, then build disciples, then build leaders of disciples.  It is such an easy process and bears fruit beyond compare.  The ASSI program in Delhi started as nothing three years prior and now boasts 10,000 new believers in Christ ( the true number is 16,000 but they never offer the real numbers, always shooting way low to avoid pride).
The post for today was long, but really had a lot packed into a day designed for rest.  As we were told on our first day, “you can rest on the plane home.”
Share...